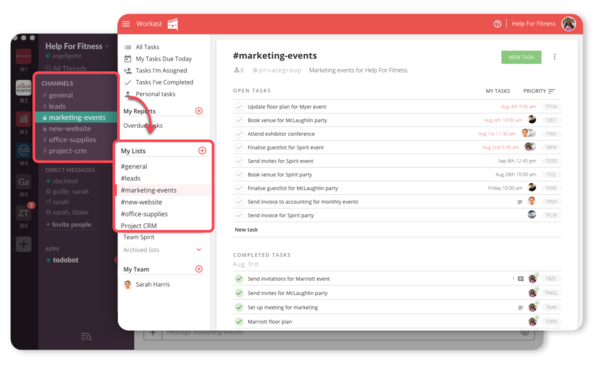 Formerly known as To-do bot, Workast quickly grew as a small project by co-founder and developer Guillermo Gette, to become one of the most popular apps in the entire App Directory

Workast is used by more than 100,000 active users from companies like IBM, PayPal, Expedia, eBay, Oracle and Ticketmaster. Workast has over 400 installs per day with a growing active user base of 20% month to month.

Workast is the application where work gets done. It is used by teams to create tasks, organize daily work, manage projects and track productivity. Workast believes that a Slack first approach to task and project management will completely disrupt the web centric approach of legacy project and task management tools like, Asana and Trello.

Workast leverages the Slack platform to create a project and task management layer directly on top of the Slack workflow. Workast is able to capture these tasks in a fast paced environment by allowing users to create, manage and track tasks inside channels and conversations without ever leaving Slack.

With Workast, teams can not only manage projects, but also capture and track work that didn’t have a place in Asana or Trello, such as daily tasks, work between a manager and team member, ad-hoc tasks or high priority issues.

Managers and team members struggle with visibility of their work. Workast fixes this with smart reporting which brings a 360 degree view of what teams are working on whether it be projects or tasks.

“We have seamlessly brought task management into the way teams are already communicating. If you use Slack, then you need Workast to manage your team work – the two go hand in hand,” said Workast CEO Guillermo Gette.

Workast is a Slack-first task management tool that assist teams to organize their daily tasks, manage projects and track productivity. With over 100,000 active users, Workast is one of the most popular apps on the Slack marketplace. Workast is a MuckerCapital backed company, based in Los Angeles, California. For more information, please visit www.workast.io